Taipei Branch together with the Da'an Branch of Taipei Police Bureau, the referral authority, force to enforce the fine of illegal street vendors. 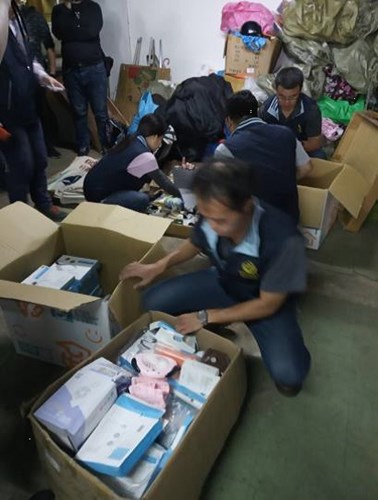 41 boxes of goods were successfully seized on two stall site and warehouse.

On October 7, 2019, Wu, Yi-Tsung, the Director of the branch, and Chou, Huan-Hsing, the Commissioner of Da'an Branch of Taipei Police Bureau, personally presided over a contact meeting between the two sides. They discussed the strategy of the project, determined that the large account in arrears was the target of execution, and carefully confirmed that the target of execution was not a disadvantaged family, and that there were business facts and equivalent goods available for execution. After two weeks of investigation and search, the Branch reported seven execution targets. At the second special project meeting held on October 23, two large accounts in arrears with continuous illegal stall arrangement having inventory warehouse were selected as the execution target, and specific enforcement details were planned. On the afternoon of October 24, on the site execution, 41 boxes of goods and one motocycle were successfully seized at two stalls and warehouses. The executive action was confirmed by numerous reports in the print and electronic media on October 24 and 25. On October 25, two large arrears both visited the Taipei Branch to request a negotiated settlement plan. There were also 4 unpaid vendors who took the initiative to pay for 5 cases to Da'an Branch. The project played a role in improving the awareness of law-abiding and self-payment rate.